Showing posts from August, 2019
Show all

August 30, 2019
This fiction round-up is terribly late, what with a summer of traveling and family and also just plain summer laziness on my part. But here goes: short fiction that I read and loved in June and July. Stories from The Dark Magazine “On Highway 18” by Rebecca Campbell I love the slow-burn that is characteristic of Campbell’s work, and this is a great example of it: a seemingly realist portrayal of adolescent friendship and restlessness on Vancouver Island in the pre-Internet era of mixed tapes and Guns ‘n Roses. But from the beginning there’s a note of disquiet, which grows slowly as the piece progresses. Petra and Jen are best friends on the island, and they spend hours driving together, hanging out in the parking lot of 7-Eleven, going to parties in the woods. But Petra is headed to college, and Jen is not, and not all friendships are forever. There are hitchhiking ghosts in this piece (or are there?), and rumors of living girls who hitchhike to untimely ends. There’s a
Post a Comment
Read more

August 27, 2019
Bangkok Wakes to Rain  by Pitchaya Sudbanthad is a gorgeous, immersive novel, ambitious and epic in scope while also intimate in its focus on individual character lives. This is a story that spins through time--from the tale of an American missionary in old Siam to the story of political upheaval and the massacre of student activists at Thammasat University in 1976; from the present-day where a middle-class college student considers plastic surgery to get ahead in the job market to a future where most of old Bangkok has been drowned by flood waters but the rich can upload their minds into a virtual paradise. Above all, this novel of many stories is about the city of Bangkok itself—"Krungthep” as it’s called in Thai, and as it is referred to throughout the novel. The organizing structure of this novel only slowly becomes clear. Each chapter opens with a different viewpoint character, and there are many (including a chapter told from the perspective of stray dogs and one told
Post a Comment
Read more

Notes from family vacation to the UK: A Literary Pilgrimage 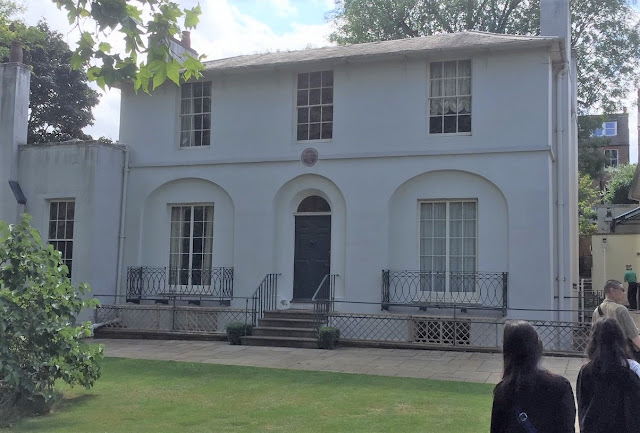 It was a literary pilgrimage, of sorts. It had been over twenty years since I last set foot in Great Britain. I was a college student back then, in Cambridge for six weeks on a summer study-abroad program. I was taking courses in poetry. I was in love with the English Romantics, and I was in England for the first time. Twenty-five years later, I was back with my husband and children. Our daughters’ first time in Europe. We wanted to do touristy things—the Tower of London, the London Eye, Westminster Abbey (we never did get to that last, but it’s another story). We took a boat ride on the River Thames. Became familiar with the  Tube. Walked through Piccadilly Circus, Soho, Chinatown, and all over until our feet hurt. We saw the great contrasts of London, the startling juxtapositions of history: the ancient walls of the Tower of London, over a thousand years old, on one side of the Thames; the glittering Shard, that thrusting skyscraper of glass, on the other side. We saw
Post a Comment
Read more

New story! "Wings" is now out in the debut issue of Translunar Travelers Lounge

August 16, 2019
Very happy to say that I have a new story out this week! “Wings ” is something of a variation on the Tam Lin myth; it’s a story of shape-shifting lovers. It’s also a story about the gift of stories and language, and of what transcends words. “Wings” appears in the debut issue of a wonderful new magazine,  Translunar Travelers Lounge.   This first issue contains the work of a number of writers I admire, and of writers I don’t yet know but whom I’m looking forward to reading. Check it out if you can!
Post a Comment
Read more
More posts