Showing posts from July, 2016
Show all

The Lilies of Dawn is now officially out! 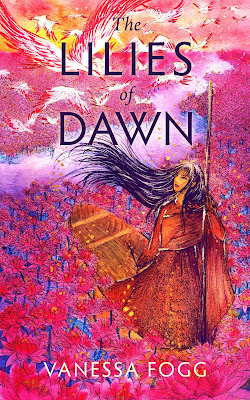 So my fantasy novelette, The Lilies of Dawn, has now been officially released! You can go here to the publisher page for more information and links to purchase (it's available as both ebook and paperback). I've been seeing people retweet my initial announcement on Twitter; I've heard writer friends and non-writer friends tell me that they've purchased a copy. I've already seen lovely reviews from advance readers on Amazon and Goodreads. And I am so, so gratified. I'm thrilled to be finally sharing this world and its characters, Kai and Kevak, with you all. (Note: that gorgeous cover art is by Likhain . Check out all her work! And thank you, too, to Francesca Forrest for expert copyediting. And thank you to Annorlunda Books for believing in this work and investing in it).
Post a Comment
Read more

July 17, 2016
I seem to have settled into a rhythm of posting short fiction reviews bimonthly. So hey, let’s go with that, shall we? Okay, some wonderful things I’ve read lately. . . Uncanny Magazine " The Drowning Line" by Haralambi Markov I’m finally almost caught up with Uncanny Issue 10. It’s a truly stunning issue, and this story is one reason why. Visceral, intense, harrowing—it’s the tale of a terrible family curse and the narrator’s struggle to free himself and his descendants of it. The intensity of imagery and feeling remind me of Alyssa Wong’s desert tale, “You’ll Surely Drown Here if You Stay”   from the same issue ( recommended in my last short fiction roundup ). It’s an interesting pairing of stories—water and desert, constrictive families ties, a common struggle to escape. And Markov’s story is a fine bookend to a truly strong issue. "El Cantar of Rising Sun" by Sabrina Vourvoulias   I’ve only just started Issue 11 of Uncanny Magazine, but t
Post a Comment
Read more

Publication updates for June: The Wave at The Future FIre

July 01, 2016
Okay, despite all the general insanity of the world, June was a good month for me, publication-wise.  On June 3 my short story, "In Dew and Frost and Flame," was published at the lovely new journal, Metaphorosis Magazine.  On June 24, there was t he official cover reveal for my upcoming fantasy novelette, "The Lilies of Dawn," to be released in July by Annorlunda Books . And on June 26, my latest story, "The Wave," was published at The Future Fire.  It takes place in the same world/timeline as my previous story in The Future Fire, "Disconnected." So yes, it's cyberpunk, or least cyberpunk-ish. And it's also about big-wave ocean surfing. I've never surfed in my life, but this story did manage to fool some real surfers into thinking that I have.  And now it's July, and I'm late in getting to bed. I'm off for vacation tomorrow in the Colorado Rockies! And hopefully I'll have new adventures to write about when
Post a Comment
Read more
More posts