Showing posts from February, 2019
Show all

New story! "The Message" out at The Future FIre 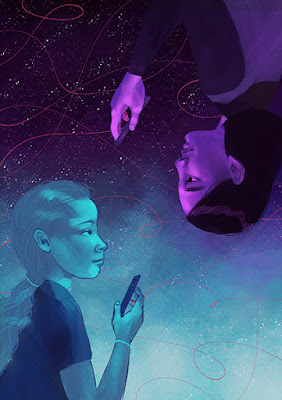 It’s a new story day for me! “The Message” is now out in the latest issue of The Future Fire. It’s a quiet story of First Contact, of communication (and missed communication) both between the stars and here on Earth. It’s also about anime and fan-fiction, and the accompanying illustrations by Pear Nuallak are perfect; I am in utter love.

This also happens to be my fourth appearance in The Future Fire! This lovely magazine has helped to launch the careers of now well-known writers and continues to be an encouraging place for new and emerging writers in the science fiction/fantasy scene. This looks to be a particularly strong issue; I’m acquainted with the work of a number of my fellow writers in this issue, and I look forward to getting to know the work of the others. And the illustrations are all wonderfully evocative.

Update #1: I've read the entire issue of The Future Fire, and it is indeed a strong one. The editors have done an absolutely lovely job of curating stories and poems…
Post a Comment
Read more

February 24, 2019
For a few years, now, I’ve been writing up these short story round-ups on a bi-monthly basis. But of late, there’s been so much good stuff coming out that summarizing two months’ worth of great fiction at a time is overwhelming. So, I’ve decided to try a monthly format. . . and, of course, I still found myself behind.
But better late than never. Here’s a list of things I read in January—stories dark and brutal, and stories beautiful and hopeful and full of light. Sometimes all of those at once.
“Red” by Malinda Lo at Foreshadow Magazine
A retelling of “Little Red Riding Hood” as you’ve never seen it before. Set in China during the Cultural Revolution, this is an incredibly dark, brutal tale in which real-world violence stands in for the fairy-tale wolf. Yet at the end, despite horror, there’s a kind of triumph as well.
“Burrowing Machines” by Sara Saab at The Dark
There was a strange agitation to London that summer from the very beginning, a hormonal moodiness, a belly heat, if cities co…
Post a Comment
Read more

February 12, 2019
Note: This review is based on an advance review copy obtained from the author.
Markswoman, Rati Mehtrotra’s debut novel, introduced a unique world, a post-apocalyptic fantasy-Asia that was a bewitching blend of science fiction and fantasy. In the aftermath of a distant Great War, five Orders keep peace among the numerous clans of Asiana—Orders of warriors telepathically bonded with their magical knives, which are made of a metal called kalishium left behind by a mysterious alien race. But the outlaw Kai Tau threatens Asiana’s peace; he has stolen terrible dark weapons—guns made of kalishium. Kai Tau has raised an army and means to destroy the Orders and take Asiana for himself.
The first book was a strong debut, with engaging characters and a fast-paced, twisty plot. The sequel, Mahimata, is even better.
Mehrotra carefully set up her game pieces in Markswoman. Now the game begins in earnest, and the plot flies. There are twists and turns, and revelations within revelations. There is a m…
Post a Comment
Read more

Story reprint sale! To the anthology, The Best Science Fiction of the Year, Volume 4!!!

February 11, 2019
I’m thrilled to announce that my short story, “Traces of Us,” will be reprinted in The Best Science Fiction of the Year—Volume 4, edited by Neil Clarke.
Neil Clarke, the founder and editor of Clarkesworldand editor of multiple anthologies, is an absolute force in the science fiction field. I’m so honored that, of all the stories published in 2018, he chose my story as among the best. And I’m so honored and thrilled to be appearing in this volume alongside so many of writing heroes, stars like Ken Liu, Aliette de Bodard, Sofia Samatar, Lavie Tidhar, Alyssa Wong, and more.

Click on this link to see the full table of contents and links for pre-ordering. It won’t be out until July, but I just had to share this now.