Showing posts from 2017
Show all

December 11, 2017
Snow is falling in thick flurries past my window as I type this. Winter is finally here; the nights are long and the daylight brief. Stories are lights in the darkness. At least, the right ones can be. And even dark stories can bring comfort; they can give shape and a semblance of control to that which is chaos; they let us know that we’re not alone, that others have been through the darkness, too.  This past fall brought so many wonderful stories of dark and light, often in the very same piece. I can’t hope to read more than a tiny fraction of all the worthy work being published these days. But of all the great stories out now, here are some that I did find and love. I hope you love some of them, too.   Stories of Sea and River  Gone to Wrack and Ruin by Meryl Stenhouse at Empyreome Magazine Oh, what a creepy, eerie read!  Yeva and her granddaughter Lusine eke out a precarious living from the sea, gutting fish in warehouses and collecting wrack from the shore.
Post a Comment
Read more

Review: Under the Pendulum Sun by Jeannette Ng

November 24, 2017
The moment I heard the premise of Jeannette Ng’s debut novel, I knew that I wanted it. Victorian missionaries in Fairyland? Dark Gothic alt-history inspired by the works of the Bronte sisters ?  This sounded like the book of my dreams. And indeed, Ng’s novel is a dream that does not disappoint. It’s a rich, strange, increasingly nightmarish phantasmagoria of both horror and beauty. It’s impressively erudite and sly. It draws the reader expertly in, builds steady tension, then lays shocking plot twist after plot twist. It’s a novel that opens into landscapes of wonder, and becomes a moving, even rapturous, journey.   In the alternate-history world of this novel, the Faelands (also known as Arcadia) were discovered on the fourth voyage of Captain James Cook, when “the greatest navigational mind became impossibly lost and thus impossibly discovered a different realm.” As with all other lands discovered by the English, the English of this novel decide that the Faelands must be op
Post a Comment
Read more

Review: Markswoman by Rati Mehrotra (coming out from Harper Voyager in 2018)

October 30, 2017
Disclaimer: Rati Mehrotra is a friend, and I received an advance review copy of this book from her. I’ve been looking forward to Markswoman since first hearing about it. Rati is an accomplished short fiction writer (see links to her short stories at https://ratiwrites.com/ ) and I was eager to see what she could do in the long form. Reader, I was not disappointed. Markswoman takes place in a world I’ve never seen before: a seeming post-apocalyptic Asia which mixes science fiction and fantasy. In the distant aftermath of a Great War, five Orders keep peace over the numerous clans of Asiana--Orders of warriors who are telepathically bonded with their magical knives. Kyra Veer is the last of her clan and a young warrior in training in the sisterhood of the Order of Kali. As the novel opens, she is completing the last task needed before becoming a full-fledged Markswoman of her Order. Kyra’s future should be relatively set after this. But, of course, there is no smooth sailin
Post a Comment
Read more

October 13, 2017
A few weeks ago, my latest fiction story was published. It’s called "Taiya," and you can read  i t  here at The Future Fire.   It’s a ghost story set in an imaginary country. And it’s been getting some wonderful reviews. Maria Haskins included it in her September 2017 Short Fiction Round-up A.C. Wise featured it (and me!!) in her series, Women to Read: Where to Start: October 2017 post. The website Lady Business also has a lovely review (warning: spoilers! I’d suggest reading the story first before reading the very perceptive analysis here) As a writer, I am of course always thrilled by good reviews and attention to any of my stories. But this one is particularly dear to me. I wrote it three years ago, and it was the first story that truly scared me to write. It wasn’t the (named) ghost in the story that scared me. What scared me was the feeling of exposure, of revealing something about myself that I perhaps didn’t want anyone else to see. This is why so
Post a Comment
Read more

Jenny Zhang's writing is a knife in the heart.

October 12, 2017
"It was my mother who tucked him in and told him that there exists a sort of love in the world that only survives as long as no one speaks of it, and that was the reason why he would never have to worry because my grandmother was never going to be the kind of mother who held her children in her arms and told them how smart and beautiful and talented they were. She was only ever going to scold them, make them feel diminutive, make them feel they were never good enough, make them know this world wouldn’t be kind to them. She wasn’t going to let someone else be better than her at making her children feel pain or scare them more than she could, and to her, that was a form of protection. That’s how we will be with our own children, my mother told my uncle, proud that she had realized this."               --Jenny Zhang, "Our Mothers Before Them," from her collection Sour Heart
Post a Comment
Read more

October 09, 2017
On gray autumn days, there’s nothing I want so much as a cup of hot tea, a blanket, and a good story. Here are some good things I read over August and September—stories to drink in with your tea (or beverage of choice) as the season darkens and chills. Stories strange and beautiful, dark and light These Bones Aside by Lora Gray in The Dark Each month, Yagra plants a new goddess to swallow the moon and save the world. This is such a hauntingly beautiful and painful story of motherhood, loss, sacrifice, and innocence. It marries mythic imagery and imagination with intimate feeling. Absolutely gorgeous. Red Bark and Ambergris by Kate Marshall at Beneath Ceaseless Skies Sarai was kidnapped to be a maker of perfumes for a Queen. She has the talent for it—to be a scent-maker—but what she wants is to be a poison-tamer, for it’s only as a poison-tamer that she may be able to escape her island prison. This is a beautiful and heartbreaking story of love, loss, bittern
Post a Comment
Read more 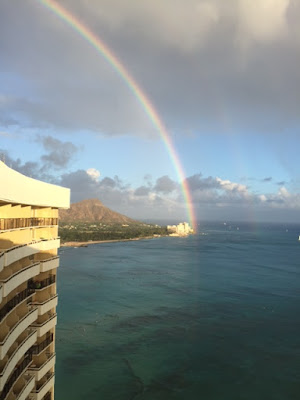 So last month we went to Hawaii. We flew from Michigan to Honolulu. We stayed in a hotel on Waikiki Beach and on our third day there we saw this.  It's a double rainbow! Look closely for the second, fainter rainbow to the right.  We walked under rainbow shower trees and by flowering plumeria, among the luxury stores and high-end glitz of Waikiki. We kept going back to the Japanese food court across the street from our hotel. There, we stuffed ourselves on Japanese curry (tonkatsu with curry is the best), musubis, and ramen the likes of which we have never ever had here in the Midwest. Rainbow shower tree in Waikiki Japanese food so good, we just kept going back We used Lyft for the first time and discovered that Lyft drivers are often very colorful characters. Husband and I were particularly taken with the man who was sooo excited to tell us all about his start-up business developing customized cannabis-derived coc
2 comments
Read more
More posts