Showing posts from July, 2018
Show all

July 29, 2018
It’s not quite the end of July, but I’m traveling through the first part of August, so I’ve written up my June and July story selections early! As always, there were too many beautiful and wonderful stories to include all that I read. But here are a few that captured my heart.

“Waterbirds” by G.V. Anderson’s story at Lightspeed
Celia is a MxMill Companion, model 2.3—an android under contact to elderly, kindly Mrs. Lawson. For years the two of them have been coming to the Norfolk coast to watch the migrating birds. During these visits, Celia strikes up a relationship with a local artist named Irene. Celia isn’t supposed to have wants of her own—or if she does, she’s supposed to put the wants of humans before her own. But over the course of a human lifetime, things can change. This is a quiet, beautifully crafted piece about love, autonomy, and freedom. It’s a science fiction tale tinged with fantasy, a story that starts off as a myster…
Post a Comment
Read more

July 02, 2018
The Future Fire is an online magazine of speculative fiction and poetry. I've published a few stories there. And today, as part of their blog series, I join five other writers in discussing literary places we love. You can check out the discussion here. 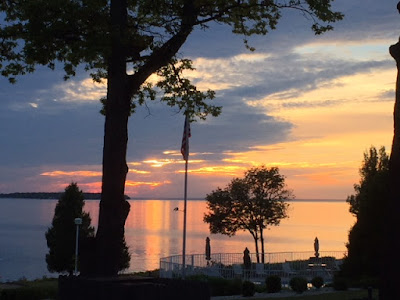 I’m also featured in a new interview for the Reading 5X5 anthology series. In case you missed it, the idea behind  Reading 5X5 was to give five basic story outlines in five different genres to five different writers. . . and to see just what diverse and wonderful stories might result. I wrote a piece for the genre of “contemporary fantasy” and was delighted to see how differently the assigned writers approached the same basic premise. I previously blogged a bit about my story for the anthology here. All proceeds go to the Clayton Memorial Fund to benefit Pacific Northwest writers facing medical emergencies.
In other updates:
My family and I recently returned from a road trip vacation. We took a ferry across Lake Michigan to Wisconsin's Door County pen…
Post a Comment
Read more
More posts