Showing posts from January, 2017
Show all

An interview with Djibril al-Ayad about Problem Daughters, an new anthology focused on speculative stories of intersectional feminism 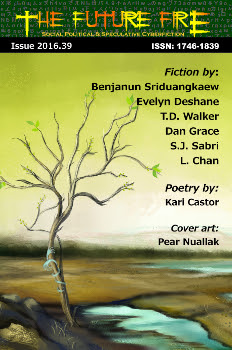 Problem Daughters will amplify the voices of women who are sometimes excluded from mainstream feminism. It will be an anthology of beautiful, thoughtful, unconventional speculative fiction and poetry around the theme of intersectional feminism, focusing on the lives and experiences of marginalized women, such as those who are of color, QUILTBAG, disabled, sex workers, and all intersections of these.
--from the Indiegogo site for Problem Daughters

For years, the team at The Future Fire have been bringing us all beautiful, sharp, socially aware stories of speculative fiction. In addition to the magazine of the same name, The Future Fire has also published five acclaimed anthologies. Now the team at the The Future Fire is fund-raising for their newest project, Problem Daughters, a pro-paying anthology to be edited by Nicolette Barischoff, Rivqa Rafael, and Djibiril al-Ayad. Today I am pleased to be hosting an interview with editor Djibril al-Ayad about this latest venture.

On narratives of hope, kindness, and happiness: Yuri!!! on Ice (very light spoilers)

January 05, 2017
Yuri on Ice saved 2016.
Yuri on Ice saved me. Again and again across the Internet, I’ve seen variations on the phrases above. If you didn’t already know, Yuri on Ice is an anime that exploded into popularity this past fall, attracting a global audience and the attention of many people who don’t usually watch anime. On Twitter, it was the most talked-about fall anime by a huge margin. The airing of the finale apparently crashed the servers of the anime streaming site Crunchyroll. Not since Attack on Titan have I seen a new anime with such cross-over buzz, and the two shows could hardly be more different. Attack on Titan was a grim, gory, almost unrelentingly dark action-thriller about teen soldiers battling man-eating giants. Yuri on Ice is a heartwarming, tender and uplifting sports anime about love and male figure skating.

I don’t think anything could have saved 2016, but I am not being hyperbolic when I say that Yuri on Ice helped me get through some rou…
Post a Comment
Read more
More posts